I haven't posted in a little while because last week was my spring break! While many other teachers traveled to Florida or other warm vacation spots, I hung out at home in beautiful Columbus, Ohio! Luckily, it was in the mid-80's for most of the week. I think the normal highs for this time of the year are in the upper 50's! I was able to get a lot of yard work done and still have time to relax on the deck I built last year.


Of course I've jumped back into my regular routine again this week. I still have many projects that need to be finished before my spring art show. Spring always seems like it's the busiest time of the year. It's always an all-out sprint between spring break and my show. Right now, 4th grade is finishing slap-built castles. I'm in the process of firing them now. 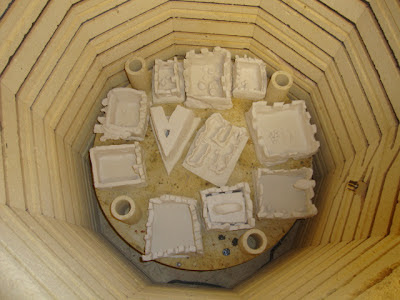 Posted by Zach Stoller at 11:51 AM No comments: 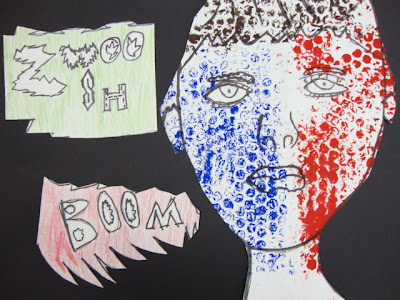 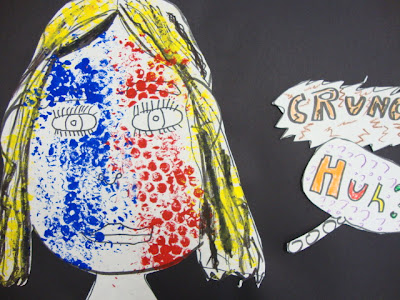 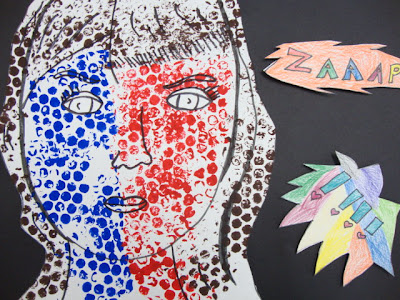 I think this will be the last of my student teacher's projects that I will be posting this year because she finished her time at Thomas last Friday. Thinking back on it, I probably should have given her the opportunity to write the blogs posts about her projects, but I really didn't want to overwhelm her.


This project was designed around students learning how to draw self portraits. I usually do a self portrait project with my third graders, so it fit in very well. Students studied the pop art work of Roy Lichtenstein and discussed his simplified use of color. After using mirrors to draw themselves, students used bubble wrap to print Benday dots on their portrait drawings. The final step was to cut out their portraits, mount them on black paper, then make action words to go along with the image.


I think the idea of this project was more exciting than the final outcome. I was a little disappointed with how the bubble wrap printing. My students had a tendency to smear the dots a little. If I would do this project again, I might just use one large piece of bubble wrap for the whole face and not worry about doing multiple colors. Some students who were absent also had pretty good success using colored pencil to make their Benday dots.
Posted by Zach Stoller at 5:52 PM 2 comments:

Last week, Thomas Elementary was lucky enough to host author and illustrator Loren Long! Long lives in Cincinnati and came up to Columbus for three days to visit schools in the district. In my time as a teacher, I have seen many people and organizations come in to the school to give presentations and performances for the students here. Loren Long was the best I have seen so far.
If you don't know of Loren Long, you should! He started out in the book world as an illustrator. He and I had a good conversation during lunch and it turns out that we know several of the same people in the illustration world. I graduated from CCAD as an illustration major back in 2004. Long's work includes illustrating children's books written by Angela Johnson, Madonna, and President Obama. You may have heard of them before! He has also written and illustrated several books, with the Otis series being the most well known. 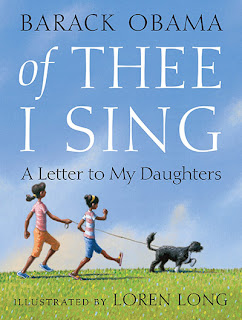 Loren did an amazing job with the students here and kept them extremely interested and entertained. It was refreshing to hear him talking about why people should draw lightly when they are making artwork. I've only said it thousands of times, but having a real illustrator tell the kids can't hurt!
Posted by Zach Stoller at 11:23 AM No comments: 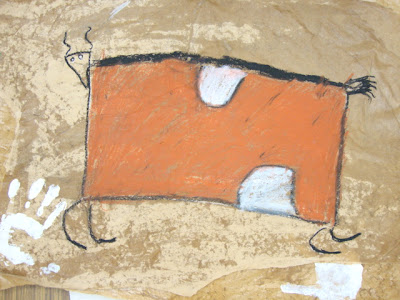 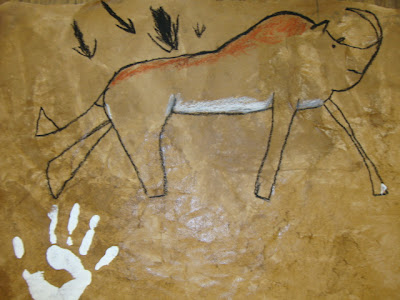 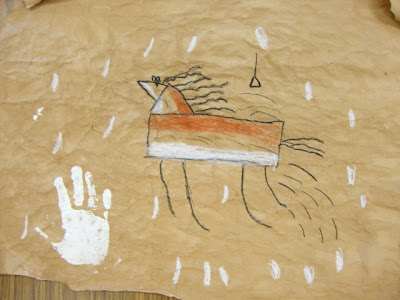 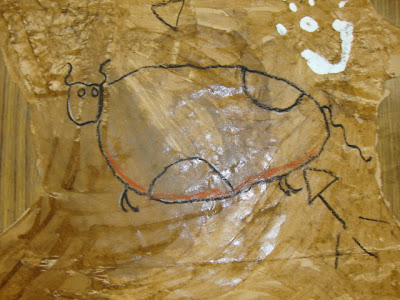 This is a project that is art show worthy! First grade classes just finished a project in which they studied cave paintings from Lascaux in France. My kids loved going on a virtual tour of Lascaux. People aren't allowed to enter the caves anymore due to the artwork being destroyed more in the few years the caves were open than the 17,000 years before they were discovered!


I don't have a digital copy of this lesson, so I'm going to describe the project a little more than usual. With this project, students started off with craft paper that was roughly torn from a big roll. I've seen other teachers use paper grocery bags as well. The students crumple the paper and carefully uncrumple it. They then use an acrylic gloss medium to cover the paper.


The second day of the project, students practice drawing various cave animals from a handout I made. After practicing, they drew their favorite animal on the paper with pencil. The pencil doesn't show up very well, so they immediately go over the pencil lines with black oil pastel to make it show up better. 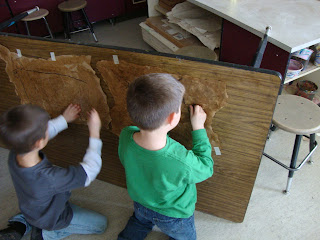 The third day of the project is the coolest. My student teacher was running this project and it was pretty necessary to have two adults for this portion of the project. Essentially, we turned the room into a cave. All of the tables were turned on their sides and faced inward. We put a fake Halloween prop fire in the middle of the room and turned off all of the lights. First graders had this last day to add a bit of limited color to their cave animals and then make a white hand print to "sign" their work. They could choose to work on the cave "wall" or on the floor. This is one of those projects that is successful across the board. I'm planning on turning the stage at school into a "cave" for the art show. I saw the idea on Pinterest and I think it will look outstanding.
Posted by Zach Stoller at 5:20 PM 2 comments:

Want to amaze and astonish your colleagues and principal? Want to look more rad than you already do? Integrate other academic subjects into your art curriculum!!! Yeah, I know we all pretty much do this already, whether other staff notice or not. It's something I enjoy doing anyway because I really enjoy science and social studies.


This is a project that Mrs. Heimlich, my student teacher, came up with. She started out talking about the life cycle of a butterfly and reading a book to the students that described each part of the cycle. Student then chose one of four native Ohio butterflies (Monarch, Tiger Swallowtail, Buckeye & Painted Lady) to sketch. They then created the caterpillar and butterfly body out of clay. While the clay was drying and being fired, students created textured paper (Eric Carle style) with the colors of the wings of their chosen butterfly. With the scraps from the butterfly paper, students made a chrysalis by taking a small scrap and wrapping it with wax paper. They then taped the chrysalis to a real stick. Everything was then mounted to a piece of railroad board. My only concern about this project is hanging it in the hallway. The clay pieces are hot glued and tied on with fishing wire, but I don't trust over 600 kids rushing around in the hallways not to send random butterfly parts crashing to the floor and shattering. I prefer to avoid art related tears whenever possible.


For once, I don't have an electronic version of this lesson plan. Mrs. Heimlich gave me a paper copy to check out before she taught, but I don't have the digital file. It's pretty self explanatory, so I'm sure you super smart art teachers can figure out how to teach it if you want to do so.
Posted by Zach Stoller at 11:01 AM No comments: 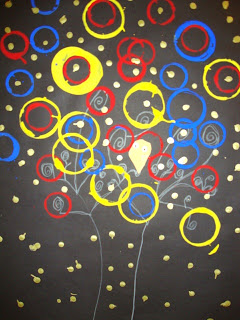 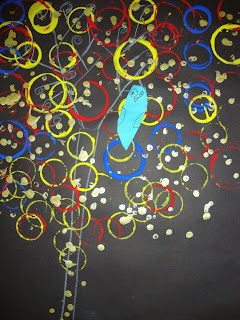 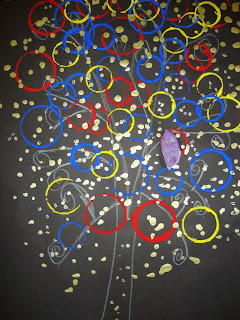 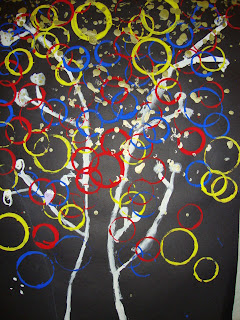 This is one of the last couple projects that I'll be posting that my student teacher came up with. I thought that this particular project was pretty successful all around.


The kids started out by looking at some examples of the work of Gustav Klimt. They discussed Klimt's work and talked about how he used a lot of pattern in his work. Mrs. Heimlich then focused more directly on Klimt's painting Tree of Life.
Students then practiced drawing trees in Klimt's swirly style. To make the "leaves," students dipped bottle caps of various sizes into tempera paint and did some simple printmaking with them. I hadn't ever done any printmaking with 1st grade before, so this was a great introduction to the concept. The last step of the project was making a small bird to go in the tree to match the one in Klimt's painting. If I were to do this project again, I would probably use a lighter color paper so the tree itself would stand out a little more. 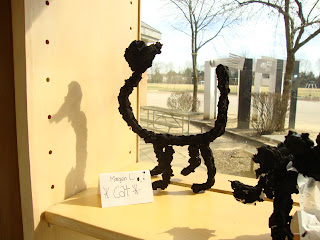 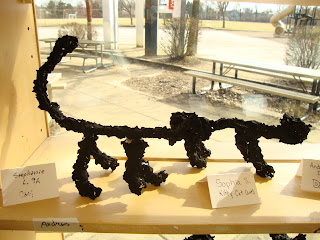 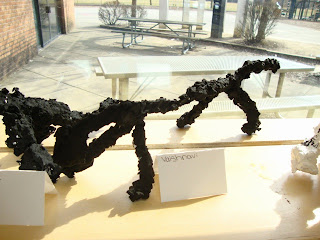 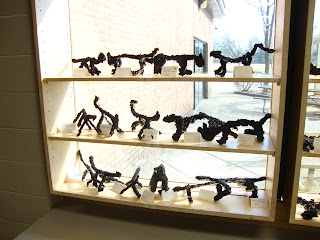 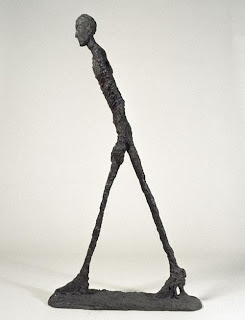 This is yet another very cool project that my student teacher came up with and taught. As she was first exploring my room and seeing what kind of supplies I had, she saw that I had quite a bit of something called Sculptamold. It is a mix of paper pulp and plaster that is mixed with water into a paste to be added to an armature. Honestly, it has been sitting around since before the time I started teaching here at Thomas. I've looked at it curiously many times, but I've never come up with something to do with it. After doing a little bit of brainstorming for a sculpture project, Mrs. Heimlich decided to do a project based on the work of the Swiss sculptor Alberto Giacometti. Giacometti is most widely known for his sculptures of very elongated, thin figures like the picture to the right.


After several attempts at a demonstration piece, Mrs. Heimlich noticed that the weight of the figure made it really difficult to get it to stand up. Giacometti also did sculptures of dogs and cats, so she decided that is what the students should make. They stand up on their own and don't require a base. Score! After the sculptures were dry, they were painted black to match Giacometti's work.


This project turned out really well and I'm considering doing it again next year. It is one of those projects that nearly every student does really well with.

Despite the drastic difference in appearance, you ARE STILL viewing the Thomas Elementary Art blog. As I mentioned before, I was really getting tired of the old look. I decided to draw my own header (another benefit of having a student teacher!) and give the blog a more personalized look. My idea right now (we'll see if I actually end up having time for this) is to have several different headers that I can change with the season. Hopefully everyone likes the new look. I'll be putting up new projects very soon! 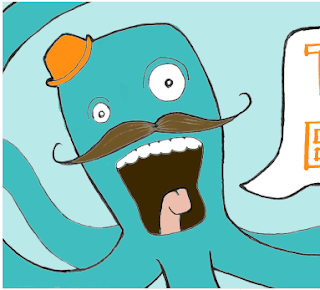 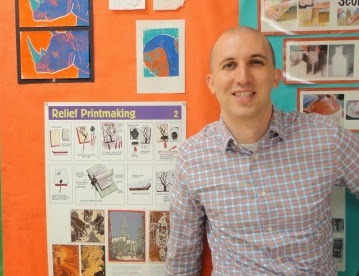 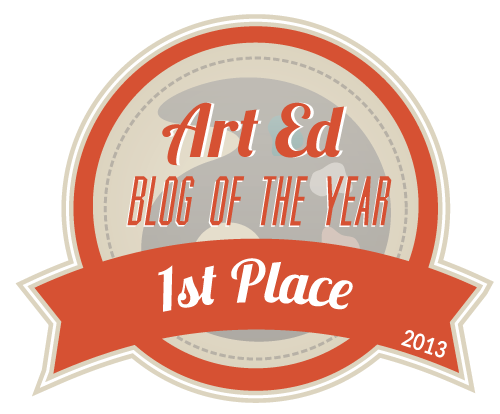 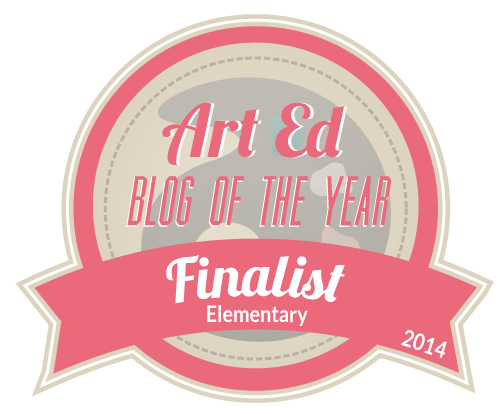 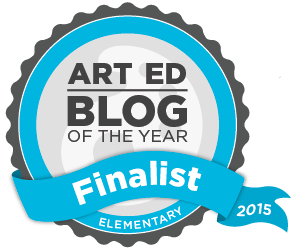 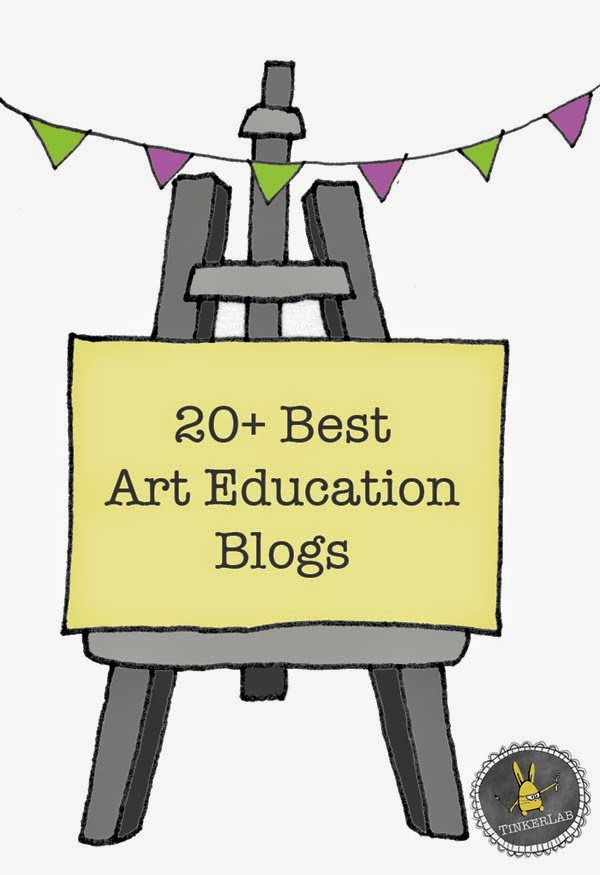 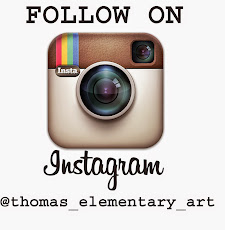